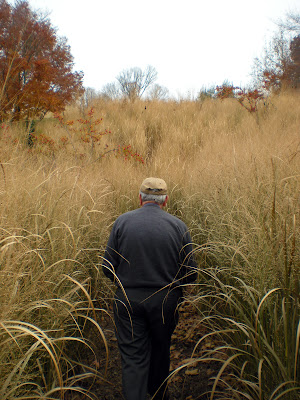 Wolfgang was a personal mentor to me and many, many others.  What was even more impressive than his brilliant and evocative plantings was his generosity of spirit and joy in the landscape.  I plan to write a fuller remembrance of Wolfgang soon.  If you knew Wolfgang and want to post a message for him, his official website is collecting those messages.
7 comments:

Lust.  The first time I saw a picture of Jacques Wirtz's cloud hedges, I wanted them.  Of course, I often look upon glossy magazines of European gardens and covet one thing or another.  But the overgrown boxwoods that the Wirtz's clipped into iconic cloud-like shapes stayed with me. They were both solid and structural, yet light and whimsical.  Artificial yet organic.

For years now, I've been thinking about using cloud hedges in a design or my own garden, but to be honest, I haven't been confident I can pull it off.  After all, cloud hedges are more about garden craftsmanship than design acumen.  So I was delighted when I saw Jake Hobson's new book, The Art of Creative Pruning.  I hoped I would find a step by step tutorial on how to create this effect.  The book unfortunately is more of an illustrative coffee table book than it is a how-to manual.  The images themselves are instructive, and Mr. Hobson does give some useful advice for creative pruning.  But I found his advice for creating cloud hedges to be a bit too general: " Rough out the basic forms, following the flow of the plants."  So I went outside and looked at an overgrown yew hedge in my front yard.  I wasn't seeing too much "flow" to work with.

Black Walnut Dispatch, written by Virginia based gardener and garden designer Mary Gray, is one of the best new garden blogs I’ve come across in a long time.  Full of heart and humor, Mary has already started an impressive number of high quality entries, from mocking oversized outdoor kitchens, to a satirical ode to L.L. Bean catalogues, to a moving manifesto about why we garden.  The writing sizzles.  It is like Garden Rant with a wry sense of humor.  I recently subscribed by email so I won't miss a single post.  Be sure to check out Black Walnut Dispatch.   You will not be disappointed.
2 comments: