On Dwelling: The Delight of Garden Structures 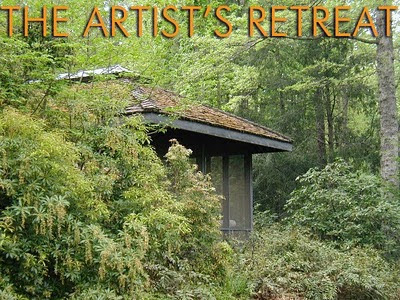 My most spectacular garden is the one I’m constantly creating and re-creating in my head. Where budget, space, and lack of time limit real gardens, these constraints vanish in my ever-evolving fantasy garden. The crowning feature of this fantasy garden is the artist’s retreat: a small architectural jewel mostly swallowed by jasmine vines, climbing roses, and pomegranates. As the sites for my fantasy garden vary—sometimes a small urban courtyard, other times a river valley in the Blue Ridge, or sometimes a high elevation conifer forest—the one constant in every garden is this retreat.

[Mark Twain in his writer's study at Quarry Farm, photo from Elmira College]
Often during quiet moments, I ruminate on the pleasure of inhabiting a small garden shed or retreat draped in vegetation.  Mark Twain’s writer’s study is one of the more delicious structures I've ever seen.  Built as a gift to Twain by his brother-in-law, the small octagonal structure used to overlook the Chemung River Valley.  Twain wrote much of The Adventures of Tom Sawyer and The Adventures of Huckleberry Finn in this study. 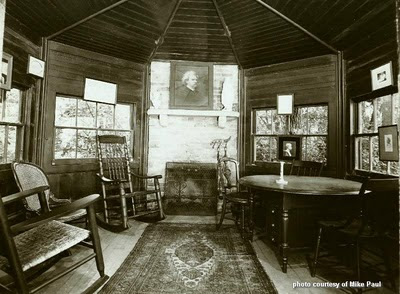 [A view inside Twain's study; photo courtesy of Mike Paul]
“It is the loveliest study you ever saw," Twain wrote his friend William Dean Howells in 1874, "Octagonal with a peaked roof, each face filled with a spacious window...perched in complete isolation on the top of an elevation that commands leagues of valley and city and retreating ranges of distant blue hills. It is a cozy nest and just room in it for a sofa, table, and three or four chairs, and when the storms sweep down the remote valley and the lighting flashes behind the hills beyond and the rain beats upon the roof over my head—imagine the luxury of it."

The romantic structure in the landscape has a rich intellectual heritage. Even before British Romantic poets exalted the crumbling hermitage tucked into the pastoral landscape, architectural ruins enlivened the imaginations of artists, poets, and gardeners since classical antiquity. Something about these beacons of shelter in otherwise wild landscapes appeals to us at an instinctual level. The British Romantics loved the stimulating effect they had on the imagination. These architectural ruins were an ontological fragment that, in their incompleteness, aroused the mind's eye. Ruins were potent symbols of both the permanence and transitory nature of man. [Image on left is Landscape with Draughtsman Sketching Ruins by Claude Lorrain, 1630]

One of my favorite blogs celebrates the lasting image of ruins.  Romantic Ruins: The Sweet Lure of Decay, Death, and Destruction is dedicated to the continuing power that the image of romantic ruins holds in the contemporary imagination. The blog is written under the mysterious moniker I.N. Vain, and cleverly shows how ruins still influence fashion shoots, movies, and advertising. 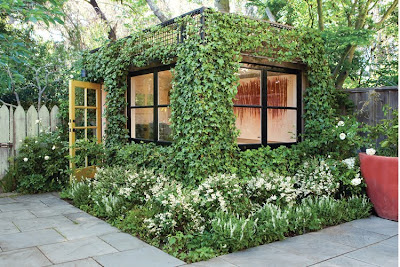 [A former storage shed is transformed into an art studio.  John Sutton Photography]
Even hard-edged, contemporary garden design sometimes succumbs to romantic impulses. A backyard terrace designed by San Fransisco-based Scott Lewis Landscape Architecture shows how a garden retreat can work elegantly in a compact urban space.  The firm transformed a former garden shed into a luscious art studio by adding windows and cladding the structure in a metal grid that allows ivy and vines to flourish on the facade.  The studio becomes the visual centerpiece for the garden. 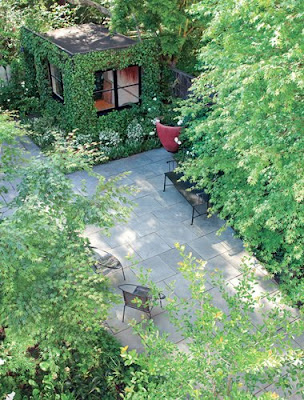 I struggle to identify what makes these garden structures so appealing.  My attraction to them feels primal--a deeply rooted human impulse that draws me to these beacons.  Perhaps we've evolved to to seek shelter in otherwise forboding landscapes; we are somehow wired to recognize these harbors of security to survive.  Or perhaps it is just the yearning of the modern man to restore a right relationship with nature--one in which our footprints fit inside the natural order rather than obliterate it altogether.  Or perhaps these structures speak to the essence of dwelling, the Heideggarian understanding ("poetically man dwells") of the way we relate both physically and spiritually to our environments.  Whatever the explanation, I continue to delight in the intellectual, emotional, and spiritual pleasure that these dwellings have over me. 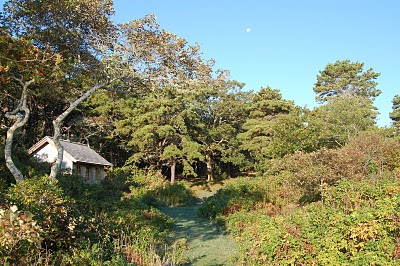