Can You Spoil Plants?

Is it possible to spoil a plant?  According to science, the answer may be 'yes.' 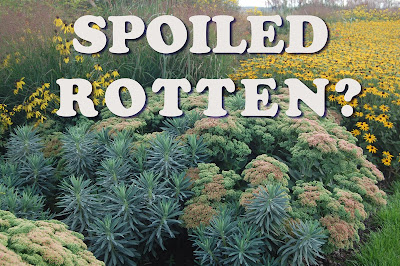 After a wet spring, this past June was the hottest month on record in the Washington, D.C. area. As a result of this dramatic shift, I have watched my planted darlings go from plump, fat hens to emaciated whips, all in a period of a few weeks. Which makes me wonder: did all of the watering, feeding, and coddling I did in the early spring (when my garden fever is at its peak) actually spoil my plants? Did my overindulgence make them unprepared for the hot, grueling summer? Is it actually possible to spoil a plant?

Turns out, the answer may be ‘yes.’ I consulted plant science guru William Cullina whose recent book Understanding Perennials: A New Look at an Old Favorite had some revealing answers.  According to Cullina, an abundance of water and nutrients is a signal to plants that it is ok to grow, whereas drought signals to the plant that it is time to cut back. Over watering and over feeding, particularly in a closed environment like a planter, can be a problem once you stop. Just like a person who gets used to a large income, and then has a sudden decrease in salary, plants also struggle at sudden shifts.

In most areas, the amount of rainfall and available nutrients varies during different times of the year. In the eastern U.S., the month of May has a highest average rainfall of the year, while September is significantly lower. Plants adjust slightly to feast or famine by transpiring at higher or lower levels. After a soaking rain, the soil is saturated and roots can easily absorb water. But as the soil dries, it becomes increasingly hard because the remaining water becomes both progressively dirtier as it is concentrated. Some plants can actually raise the solute levels in their roots to create more osmotic pressure to suck up the water, acting like a built-in pump. However, as the soil gets drier, this phenomenon can actually reverse, causing the soil to pull water out of the plant. This is why fertilizing during drought is a bad idea. Inorganic fertilizers are essentially a mix of salt which actually pulls moisture out of plants.

Sudden drought can be particularly damaging to plants as it causes the root hairs to die and the plant stops growing. This makes absorbing water that much harder because a plant has to re-grow new roots in order to take in new water. Even if the immediate symptoms of drought like wilting and dieback go away, the long term effects of drought linger. To replace dead roots, a plant must use its food reserves it was saving for dormancy and flowering.

“Let’s say you plant a hibiscus in June and water it well for the first two weeks,” explains Cullina, “then you go off on vacation and find the poor thing badly wilted when you return three weeks later. After watering it well over the next three weeks, it appears to recover and even blooms, but then it fails to return the next spring. While cold damage would be the obvious suspect, it is equally likely that drought stress a full six months earlier is to blame.”

The solution to this problem, says Cullina, is to choose plants that are adapted to your region’s average rainfall, and then water them consistently. While the amount of rainfall from year to year may not be predicable, one reality is increasingly clear: water use is quickly outpacing the supply. Gardeners must learn to adapt to the future of water scarcity before it is too late.