The Gardens of Fernando Caruncho

Fernando Caruncho discovered his calling by reading Euripides. The Spanish landscape architect, a celebrated designer who has received international acclaim for his contemporary interpretations of classical gardens, got his start in a philosophy class. “I discovered the garden,” writes Caruncho, “while I was studying philosophy at the University of Madrid.”

Caruncho, 52, was born and raised in Madrid. While in school, Caruncho was enthralled to discover that the ancient Greeks used gardens as the places to study philosophy and the nature of the world, a meeting point between the physical and spiritual. “Because of this I have changed,” says Caruncho, “my desire to become a philosopher became a desire to become a gardener. Returning to my studies of the first philosophers, the pre-Socratics, I understood that today, more than ever, we need to study, once again the essential elements of the universe.”

For Caruncho, those “essential elements” are found in the garden. Unlike most landscape architects who often distance themselves from the less prestigious scale of the garden, Caruncho embraces the title of “gardener”. “I am a gardener. That is the name that has been handed down from the past. If you change a name, you lose the connection with history, and forget you are thinking timeless thoughts and simply expressing them in a new way for a different historical period. To be original you have to know your origins.” 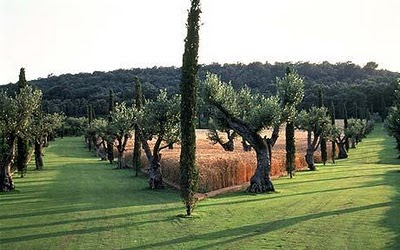 [Parterres of wheat are framed with cypresses and olives in this Catalonian farm.  Photo from The Telegraph]
Caruncho’s gardens are strongly marked with classical geometry. “I am a geometrician,” says Caruncho, “I inherit the culture of the Babylonians, the Egyptians and the Persians.” It was Carucho’s experiments with geometry and agricultural plants that first brought Caruncho to the attention of the world. Arguably his first masterpiece, the wheat parterres in the Mas de les Voltes garden in Castel del Ampurdan, Spain, uses a simple grid of wheat parterres and reflecting pools punctuated with olive trees and cypresses. The bold geometry of the grid becomes a net cast over the land that holds light and expresses the ephemeral.


[Image from The Contemporary Garden by Phaidon Press]

The signature garden elements that reappear in Caruncho’s gardens—the gridded orchards, the sensuous clipped hedges, the reflective expanses of water that mirror the sky—are examples of the extraordinary lyrical gestures that are at the heart of Caruncho’s gardens. It is that lyricism that elevates his work; the shapes are nothing new, though no contemporary designer has executed them better or made them matter more. Their familiar romance is part of their power: the fields of golden wheat hold the Catalan sky; the orchards of olives and grapes recall the landscapes of Greece and Rome; the sculpted, sinuous hedges echo the spirit of Kyoto’s great gardens. We know these forms: these shapes are fragments of the Ur-landscapes of our ancestors, the building blocks of ancient civilizations. 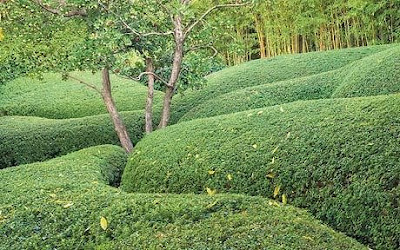 [The sinuous clipped escallonia recall the gardens of Kyoto; photo from The Telegraph]
What is new is the renewed meaning Caruncho has brought to his gardens. While a thousand contemporary designers recycle formal garden styles for suburban landscapes—little theme parks for clients with expendable incomes—only Caruncho reconnects modern man with the meaning of these ancient forms. For Caruncho, using traditional garden forms is not about repackaging a style that conveys “taste” or wealth; instead, it is a way we can connect to the universal. “Garden and gardener,” writes Caruncho, “ these are words that belong to a source language and have been asleep, silenced by terror and the uncivil past century, but that today flourish and offer us comfort.”

The courtyard of Caruncho’s home and studio in Madrid—both designed by Caruncho—is a space so stately, so intimate, that looking at it feels like peering into someone’s diary. There is an overwhelming sense of recognition: the garden is utterly idiosyncratic and private, yet at the same time, it is universal, belonging to the ages. The low, ochre-colored house is rather spartan: large windowless expanses of wall protect the insides from the heat of summer. Inside, the house opens onto a central courtyard, an area Caruncho calls his “central cloister”, a space that is part Aristotle’s Lyceum and part Kyoto’s Ryoan-ji. A large raised pool of water dominates the central courtyard. Colonnades surround the pond on three sides and clipped escallonia shrubs woven like contours frame the far side of the pool, recalling the nearby Guadarrama Mountains.

The simplicity of the space is intentional: it is meant to be a volume for capturing light. “To me,” describes Caruncho, “the central idea is to control the light.” Caruncho is fanatical about light. As the sun moves across the courtyard, the shadows from the colonnade contrast with the reflective pool. In this space, the light has a physicality that is palpable.
“In order to travel into the future, it is necessary to walk toward the pure clarity of the past,” writes Caruncho. That contradiction is what keeps Caruncho’s work strikingly original; it makes his rather simple formal gestures vigorous and fresh. Caruncho is not the first designer to resurrect ancient garden forms; but he might be the best at making these forms relevant once again.

Sources:
“The Spirit of the Geometrician” by Fernando Caruncho. An essay from Vista: The Culture and Politics of Gardens. Edited by Noel Kingsbury and Tim Richardson, 2005. First Frances Lincoln.