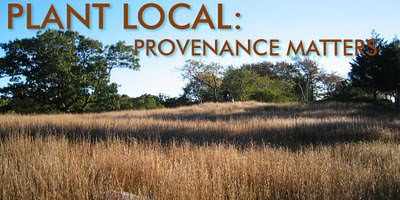 The dramatic shift toward native and sustainable gardening in the last decade is remarkable. As images of giant plumes of oil spilling into the Gulf gave us all reason to despair, I drew deep comfort from seeing so many fellow gardeners join the green revolution by converting their plots into islands of biodiversity, or by plowing up their lawns and planting vegetable gardens. These small acts of resistance are reasons to hope.

As the use of native plants in gardens has moved from fringe activity to mainstream practice, gardeners need to pay attention to where their native plants come from. Here’s the problem: the vast majority of plants in the nursery trade, natives included, are being mass propagated from a relatively small gene pool. For example, consider the meteoric rise of the use of tissue cultures to propagate plant. Nurseries select unique or beautiful cultivars of a plant, say for example, Itea virginica ‘Henry’s Garnet’—a truly vigorous and ornamental native shrub. They want to reproduce the ornamental characteristics of this exact plant and at the same time eliminate the possibility of genetic variation or aberrations. So they take samples of the plants tissues (such as a stem tip, node, or meristem), place it in a sterile nutrient medium and allow it to multiply. In this artificial environment, propagators can develop roots, multiply the number of plantlets, or create new embryos for artificial seed.

Now as weird science as all of this sounds, it’s not terribly different than taking a cutting of your favorite plant to share with a friend. The great advantage of tissue culture—and other asexual propagation techniques—is that it creates predictable plants. Gardeners can be guaranteed that the Itea virginica they purchased will have the deep crimson fall color, the prolific blooms, and the cascading stems of the ‘Henry’s Garnet’ cultivar. It also offers a much-needed alternative to native plants that were taken from the wild, a once prevalent practice.

The great problem with asexual propagation is that as we lose native habitats to development, the natives we are replacing them with represent a much narrower genetic pool than what existed. More often than not, the native plant you buy at your local retail nursery was probably populated by tissue culture from a native population somewhere far away. For example, how native is a plant that was derived from a source in Tennessee, propagated in a petri dish in Oregon, shipped as a liner plant to Michigan, and then delivered to a retail nursery in Massachusetts? By the time that plant hits your garden, its passport is full.

Why should you care if your Itea virginica ‘Henry’s Garnet’ came from a tissue culture that originated from a plant in Swarthmore College in Pennsylvania when you live in Alabama?  Because it could affect the performance of your plant. Plants have phenotypic variation associated with geographic sources that allow plants to adapt to the stresses of a particular locality. Local populations have adapted over thousands of years to the particular region, developing what biologists call alleles, or alternative forms of gene. An Itea from Alabama may have alleles that allow it to adapt to high humidity, while the Pennsylvania Itea might be more cold-hardy.
Provenance matters. Right now the native plant movement still relies on horticultural approach to plants—one that focuses on ornamental characteristics of plants without concern for the plant’s provenance or community. By doing this, we lose not only the allelic diversity of local plants, but also the aesthetic appeal of plants that have been perfectly evolved to a specific region.

Consider another example. I worked on a few projects on Nantucket and Martha’s Vineyard where we sold the clients on the concept of a mostly native landscape. We worked with a local meadow specialist who pointed out that several of the native species we were considering had unique varieties on the island. For example, we wanted to use Panicum virgatum, but learned that the Panicum native to the islands looked completely different than Panicum you see in the tall grass prairies of the Midwest. The island Panicum was short and had this wonderful vase-like profile, whereas the Panicum evolved in the prairies was tall and upright. We also learned that the island had its own unique species of Liatris (Liatris scariosa var. novae angliae) that had evolved to stand up in the wind and salt of the islands much better than the Liatris spicata being sold on the main land. For one project, we ended up using a local propagator who grew all his plants from seeds collected on the island. Not only did we preserve the allelic diversity of the island’s plants, but our finished garden fit into the context much better than if we had used tissue-culture natives from Midwestern sources.

So how can you truly plant locally? Gardeners should support nurseries that propagate natives from local populations. If you’re not sure, ask your local nursery owner where he or she gets her plants. This strategy has been remarkably successful in supermarkets; it can work for the nursery trade as well. Choose seed sources that you know are harvested from local populations. Or even better, learn how to sustainably collect seed from wild populations. There’s nothing quite as grounding or satisfying as going into a wild landscape, gathering seed, and then raising that plant in your garden. Go local with your garden. I promise, you will love it.