In Praise of our Weedy Urban Misfits 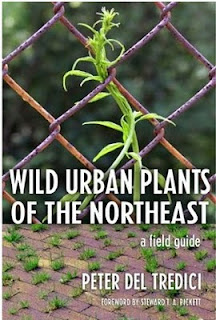 I'll admit it: I'm a plant geek. If I have a car wreck, it will not be because I was playing with my Blackberry, but because I was wrenching my neck to see some grass on the side of the road. I secretly love the days at work when someone brings in an unidentified plant into the office--I can identify faster than anyone else. I even remember the street address of interesting plants I see in my neighborhood. "Remember that spectacular Chaenomeles on 12th and Maryland?" I'll ask my wife, who usually rolls her eyes.

But underneath my I-dare-you-to-find-a-plant-I-don't-know bravado, I have a weak spot. My horticultural Achilles heel. I don't really know weeds. Yes, I can write a dissertation on the differences of South African restios. And I can see differences between indistinguishable Heuchera cultivars. But I can't tell you the names of the seven or eight wild urban plants growing in the cracks in my sidewalk. The most ubiquitious of all plants remain anonymous to me.

Until now. Thanks to a book that Rick Darke suggested to one of my colleagues, my weedy dementia will soon be over. The book, Wild Urban Plants of the Northeast: A Field Guide, written by Arnold Arboretum's Peter Del Tredici is a must own book by every horticultural enthusiast. Del Tredici has elegantly and simply catalogued all of the "weeds" that surround us. Yes, yes, I can already hear your objections. I admit, a book about weeds may not be the sexiest horticultural topic. However, what Del Tredici has done is nothing short of revolutionary.

Almost every other book on weed identification assumes the following: you must be able to identify the weed in order to kill it. But Del Tredici unveils the hidden complexity and value of wild urban plants. In addition to the standard field guide identification, Del Tredici catalogues the ecological functions the plant contributes to the urban environment.

For example, many of the common lawn weeds such as clover (Trifolium repens) or Birdsfoot Trefoil (Lotus corniculatus) actually improve the soil by fixing nitrogen in its roots. I spent an entire summer in high school pulling up Lambsquarters (Chenopodium album) from the parking lot of a nursery. Now I find out that this European alien provides food and habitat for wildlife, helps to build soil on degraded land, and actually performs phytoremediation by absorbing heavy metals (zinc, copper, and lead) out of the soil.

Del Tredici's book accomplishes two remarkable feats for a field guide. First, he draws attention to a group of plants the entire horticultural universe has ignored, and in so doing, opens a new world for discovery. Turns out, the misfits on the margins of plant society turn out to be some of the more interesting characters. Second, Del Tredici's book upends the traditional categories of natives vs. aliens or "good" vs. "bad" plants. In the mean and brutal world of urban ecology, the good guys and bad guys may not be that far apart. The pioneers of our denuded and abused urban environments may just turn out to be the plants of the future.