Olmsted in the Jungle 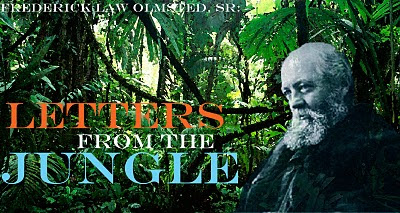 One of the many trends in garden design these days is the resurgence of the tropical garden, particularly for northern gardeners in temperate zones. Several books have been written on how to create a tropical looking landscape by using large-leafed hardy plants. So I was particularly psyched to come across these quotes from Frederick Law Olmsted, Sr, the creator of Central Park in NY and the father of American landscape architecture.
Rhodeside Harwell principal and Olmsted scholar, Faye Harwell, dug up these quotes for me as a part of an Olmsted restoration project we are currently working on.

During a voyage through Central America in 1863, Olmsted writes about his absolute delight in the tropical landscape he encountered. These are delicious quotes:

“I have never had a more complete satisfaction and delight of my love of nature than I had yesterday in crossing the isthmus. You will remember that I always had a reaching out for tropical effect, but I found the reality far beyond my imagination. … the scenery excited a wholly different emotion from that produced by any of our temperate-zone scenery…excited it instantly, instinctively and directly. …It rests upon a sense of the superabundant creative power, infinite resource, and liberality of Nature –the childish playfulness and profuse careless utterance of nature… .after my excitement was somewhat tempered, I naturally fell to questioning how it was produced, and whether, with materials that we can command in the temperate regions we could to any marked degree reproduce it…

By selection and special treatment, we can then produce trees, which, seen at a distance of a couple of hundred feet, shall lead a man to say, “I have seen such trees before only in the tropics”. …The length of stem and smallness of head is more than I had supposed, often more marked than I had supposed, I mean at a distance, the trunk frequently is imperceptible, and you see the head apparently floating unsupported. The trees growing in this way are not palms…but in their foliage so nearly like the Ailanthus that at no great distance (as a landscape painter would depict them) you would not know them apart, at least an average observer would not.”

There are all sorts of other vines….Very often it seemed as if hundreds of cords (1/2 inch) were stretched from every part of the great spreading tops of trees, fifty to a hundred feet to the ground. All large trees have strained themselves to the utmost to get their foliage away from the smothering density of the ground-growth….For tropical or tropic-like scenery you must get the utmost possible intricacy and variety…”

What I chiefly feel…is the particular beauty in tropical landscape which is due to the frequent cavernous depths of shade…the umbrella-like trees, overhanging dense undergrowth and the vines making a drapery, all natural ravines and cliffs of rock and caverns of rock, which form the characteristic topography of this coast…’