Trying out the occasional new plant in the garden is a low risk endeavor; using a new plant in a mass of 1,000 or more for a client, the stakes are higher. That’s why I lean heavily on several tried and true plants that always perform, even when the gardener may not. New perennial cultivars come out almost daily. The explosion of Echinacea cultivars in the last two years is an example of the future of plant breeding: quantity over quality. Knowing the right cultivar matters, as plants vary wildly from one another. Here is a list of a few of my favorite perennial cultivars in the last few years.

One of my favorite Astilbe is also one of the latest to bloom. This late-July bloomer is unbelievably vigorous, handling even full sun if given enough moisture. The color is spectacularly showy, a blazing purple that transforms a shade garden. Originally introduced to me by mentor Wolfgang Oehme, this plant has also been used to great effect by Piet Oudolf. Great for massing.  Image from Benson Gardens.

Another Heuchera cultivar?!  All the Heuchera breeding mania has focused on wildly-colored leaves, so this little gem has hardly been noticed. Heuchera villosa (technically Heuchera macrorhiza, but all of the nurseries use villosa) are perhaps the most versatile and landscape appropriate Heuchera on the market. Tolerant of full sun or deep shade, moisture or drought, this semi-evergreen Coral Bell produces large hosta-like foliage. It blooms in August when little else in the woodland garden is blooming. Excellent as a specimen or in mass. ‘Autumn Bride’ is the green leaved variety, but if you have the colored-foliage bug, then try “Brownies” or “Mocha.”  Image from FineGardening.com. 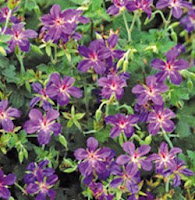 This excellent groundcover Geranium was introduced to me by my friend and Geranium guru, Ching-Fang Chen. The handsome lobed foliage with chocolate splotches is every bit as spectacular as the purple-pink flowers that emerge in early summer. If properly irrigated, this Geranium will handle full sun or light shade. Full, dense foliage makes an excellent carpet, unlike the increasingly ubiquitous 'Rozanne' cultivar.  Fall color can be outstanding orange to red tones. Good mixed with other vigorous groundcover Geraniums like Geranium macrorhizum, or excellent by itself.

A cross between A. aethusifolius and A. dioicus that combines the best of both parents. Downy white plumes emerge in early summer from delicately cut golden foliage. Like the species, this blooms best with lots of filtered light, but can handle some shade as well. A good plant to interplant with ferns or sedges, or excellent in mass for a bigger show.  Slightly more compact than A. dioicus.

I’ve always been confused by which of the many Anemone cultivars to use. Not any more. Unlike other Anemones, ‘Serenade’ is a vigorous ground cover. It is shorter than most Anemones, making it good for the front of the border. In addition to its full foliage, ‘Serenade’ is one of the longest blooming Anemones on the market.  Recent trials at Chicago Botanic Garden show this plant to bloom an average of 64 days. Light pink blooms from September through early November. Strong stalks are less susceptible to flopping.