The Most Important Urban Square You’ve Never Heard Of

Art history rarely recognizes a masterpiece in its time. And neither does urban design and landscape architecture. So it’s time to pay homage to a groundbreaking urban square that changed the way designers approach urban sites.

Situated in the heart of Rotterdam, Schouwburgplein, or Theater Square was built in what was formerly a large blank space without character. Surrounded by nondescript lowrise towers that were built after the Nazi destruction, Schouwburgplein is built on top of underground parking. Designed by the landscape architecture firm West 8, the square is an interactive urban space, flexible and adaptive to the user’s needs.

In the tradition of Italy’s medieval squares, the design for Schouwburgplein emphasizes the importance of void, creating a panorama which opens to the skyline. The entire concept of the design revolves around the idea of adaptability. Lead designer Adriaan Geuze prefers the “emptiness” to overprogrammed urban spaces and argues that urban dwellers are capable of creating their own meaning in environments. 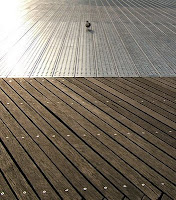 While traditional European squares are a representation of civic and religious power, Schouwburgplein empowers the public to determine their uses. Though the square is mostly flat and open, the secret to its effectiveness is the design of the urban surface. To emphasize the square as a stage, the entire surface is raised above the surrounding streets. In addition, the square’s mosaic of surface materials encourage different uses. The west side of the square is a poured epoxy floor containing silver leaves. The east side (with more sunlight) has a wooden bench over the entire length and warm materials including rubber and timber decking on the ground plane. The change in materials inspire different uses: children play a game on one surface, while skateboarders ride on another.

The surface of the square is embedded with connections for electricity and water, as well as facilities to build tents and fencing for temporary events. As a result, the surface is active and dynamic, a living field that allows the square to change day by day, hour by hour. This idea of urban surface as a living agricultural field is a departure from the philosophies of both classical and modern design. The urban surface is no longer a realm of fixed objects, but a living connective tissue capable of supporting indeterminate uses. 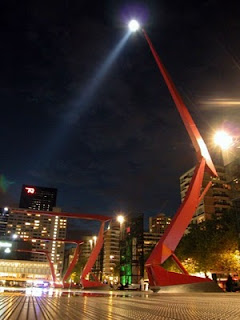 Like all good stage design, lighting is everything. The crane lighting designed for this project may be the most iconic element of the design. Coin-operated handles allow users to determine the height and placement of the lights. During the day, the shadow of the four crane lights move across the square like a clock, perhaps a reference to the Campo in Siena. At night, the dramatic lighting narrows the scale of the space as it casts a playful and theatric mood across the square.
Good design has alway prompted contempt from institutions dedicated to neo-traditional. The nonprofit Project for Public Spaces has added Schouwburgplein to its Hall of Shame, claiming that “this is a perfect example of how a design statement cannot be a great square.” The site goes on to say the square is often underused during certain times of day, a clear indication of its failure. PPS unfairly blames the design of the square for problems of the fragmented and under-utilized urban context. Of course, the PPS has always been a bit critical of anything built after the Victorian era.

History remembers projects that mark a turning point. The design of Theater Square represents a shift from the square as fixed object to the square as dynamic field; from a site of representation and power to a site of democracy and openness; from overprogrammed public space to an enabling territory. The shift in thinking represented in this design is already percolating through universities and cutting edge design firms.