Secrets of the Highline Revealed!

Ok, I love the Highline. You've probably noticed this since I've mentioned it in almost every blog. The former abandoned, elevated rail line that runs along the southern edge of Manhattan has been transformed into one of the hippest urban parks in the country. After winning the design competition, landscape architect James Corner of Field Operations along with Diller Scofido + Renfro (architecture) and Piet Oudolf (planting designer) produced a cutting edge design that celebrated the site’s history and created something entirely new.

While the project has received widespread critical acclaim, I want to focus on a particular aspect of the park’s design: the planting design. Dutch garden designer Piet Oudolf has become somewhat of an international celebrity in recent years for his projects in both Europe and America. All of Oudolf’s projects use strongly structural perennials and grasses in naturalistic drifts to create a stunning display of form, seasonality, and color. But his work on the Highline has a quality that stands apart from his other work.


Oudolf’s work on the Highline possesses a loose, breezy naturalism that smartly references the site’s former beauty as a fallow rail track. The end effect is a planting that looks at once highly designed yet absolutely natural; modern yet ecological; legible yet ineffable. As a planting designer, I’m dying to know: how did he pull that off?
A recent discovery of a piece of Oudolf’s planting plan on the internet has rocked my world. It is my horticultural Rosetta stone, the key to decoding this brilliant design. Come close, I will share with you its secrets. 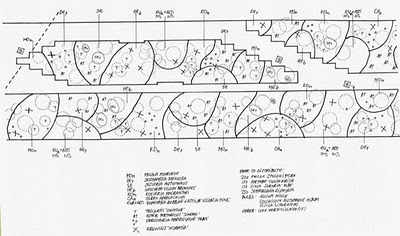 The secret? Oudolf employs the strategy of a layered matrix planting. This is where a single species—or handful of species in this case—dominates the planting, forming a matrix into which other plants are blended. In the case of the Highline, five (+/-) species of low grasses become the field into which other ecologically compatible forbs blend.
The strength of this strategy is that the base material provides year-round interest and acts like a filler, while the perennials provide structure and seasonal accent. The grasses add the loose, natural look, while the perennials create the tension that gives the project its artistic edge.
As simple as it sounds, the strategy is revolutionary. Oudolf thinks of planting not in formal terms as a painter (the Gertrude Jeckyll/Christopher Lloyd tradition), but rather through time. Plants do not simply occupy a corner of the bed, but rather emerge ephemerally out of an ever changing base of grasses. The result is a site that changes hour by hour, day by day. It is a new naturalism, a perfect blend of the designed and the natural.
Can you try this at home? Well, with planting the ultimate maxim is: know thy materials. Oudolf is a master of knowing exactly what species to use to create the matrix, and which perennial accents to blend. So perhaps the rest of us mere mortals will stumble around doing bad imitations. But using Oudolf’s strategy, our designs will now be liberated from the confines of form-making that dominated planting design for the last 2000 years.