Seeds of Change: How to get Tasty Veggies, Preserve Biodiversity, and Sock it to the Man 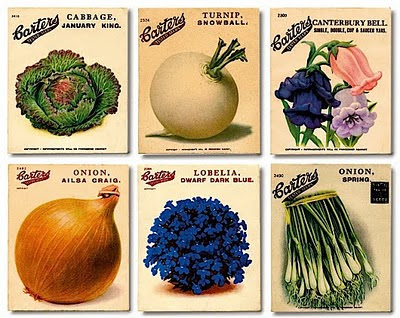 For the last two years, seed sales have hit record highs due in large part to the recession, the long winter, and a general increase in home gardening. The internet has made access to seeds cheap, easy, and fast. But how do you know which seed companies to buy from? And what are the environmental implications of your seed selection?
Want to know how to sock it to the agricultural conglomerates? Or how to save seeds from the fate of biotech companies and patent lawyers? Here’s a quick guide that explains what you should look for when buying seeds.

1. Support Small, Established Family-Owned Seed Distributors
Last year rumors spread across the internet that mega-seed company Burpee was bought by Monsanto, a massive agricultural conglomerate know for their genetically modified seeds. This rumor was not exactly true, as Monsanto actually acquired Seminis, a company that sells seeds to Burpee. Seminis sells not only to Burpee, but also to other large seed companies like Jung Seed, Johnny’s Selected Seeds, and Park seed. The big boys are indeed getting bigger.

While the ownership hierarchy and propagation ethics of large seed companies are murky, there are plenty of small, family-owned seed companies that offer a diverse selection. Select companies such as family-owned Baker Creek Heirloom Seeds. This husband and wife team are taking on corporate agriculture with their grassroots “Pure Food” movement. Their charming populism is even more seductive when combined with pictures of their adorable daughter holding baskets of heirloom fruit. Just try and resist their free catalogue—it’s pure garden porn. In addition to Baker Creek, I’ve listed a few other notable seed companies at the bottom of this blog that are worth looking into.

2. Buy Open-Pollinated Seeds
Open pollination is the oldest method of developing seeds, predating agriculture itself. Open pollination means seeds either pollinate themselves (self-pollinating) or are pollinated by insects or bees. Why does this matter? Open pollinated seeds are dynamic, that is they change and adapt to local sites. The plant’s genetic material is often crossed with the genetic material of another plant of the same species, resulting in hardier strains adapted to the local microclimate. The great diversity of heirloom apples that once populated colonial America was a result of new strains of apples that were open pollinated. Supporting open pollination means you are creating more genetic diversity in our food and plant supply.

Most seeds on the market are hybrid seeds. These are the offspring of two distant and distinct parental lines. ‘Better Boy’ and ‘Early Girl’ tomatoes, for example, are hybrids of a couple different lines of the same species. The problem with hybrids is that breeders limit the genetic diversity to guarantee a certain trait—say size or a color. Even more insidious than hybrids are GMOs or genetically modified organisms. Much of mass food production—like the Idaho potato—are now propagated with GMO. This means a plant of one species has its genetic material spliced with plants of another species. These are crosses that would have never happened in nature. Eighty percent of all corn, ninety percent of all soybean, and almost ninety percent of all cotton comes from genetically modified plants. While the jury is out on whether GMO are actually harmful to us or the environment, one thing is for sure: the world food supply is genetically narrower than at any point in history. Using open pollinated seeds preserves genetic diversity.

3. Collect Your Own Seed; Trade with Others 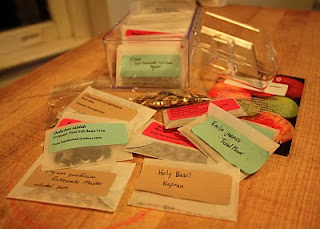 Nothing makes you feel more grounded with the cycles of nature than harvesting, drying, and storing your own seeds. Want to connect on a spiritual level with the botanical universe? Or achieve gardening self-actualization? Collect seeds. Seed collection requires you to watch the reproductive cycle of plants, to notice pollination, and understand how and when flowers turn to seedheads. Plants will no longer be your blooming indentured servants, but free ecological beings capable of self-seeding and adapting.
Last year, I noticed a Heuchera cultivar of mine had self-seeded in the garden. It was remarkable to notice the slight variations this new plant had from its parent, a result of the miracle of open pollination. My very own cultivar. Collecting seeds can be easy or difficult depending on the species. Start with annuals, then progress to perennials and shrubs.
Once you’ve achieved a small level of proficiency with seed collecting, you’re ready to embark on the next frontier: the black market seed trade. Ok, so maybe it’s not a “black” market, but there’s something downright exhilarating about arranging a backroom trade on the internet, then getting a shipment in a blank envelope. GardenWeb offers an a great starting place for seed exchanges. Become a bartering expert. Where your obsession takes you from there is up to you.
Check out these Family Owned Seed Companies:
www.sustainableseedco.com/pages/  A California company that sells untreated, open pollinated, heirloom seeds.
www.mariseeds.com/ A Tennessee company selling over 500 varieties of tomatoes and peppers.  The Italian love oozes from this site.
http://www.rareseeds.com/ The Baker Creek Seed Company mentioned above.
www.dianeseeds.com/ Diane's sells high quality seeds.  Her selections are minimal but good.
www.seedsavers.org/Content.aspx?src=buyonline.htm A seed exchange and vault dedicated to preserving biodiversity.
http://nativeseeds.org/catalog/index.php?cPath=1 Specializing in seeds of the southwest desert and native cultures.
www.selectseeds.com/cgi-bin/htmlos.cgi/2010/catalog.htm  Specializing in open pollinated annual flowers and other antique varietals.
www.victoryseeds.com/  Rare, Open-pollinated & Heirloom Garden Seeds