I have always been drawn to abstract expressionism, both artistically and philosophically.  Art critic Harold Rosenburg described the genre in terms of its action, "At a certain moment the canvas began to appear to one American painter after another as an arena in which to act. What was to go on the canvas was not a picture but an event."  In the same way, I am drawn to planting design which is muscular and gestural.  It speaks to the viewer at an emotional and spiritual level, and arranges plants in an ecologically sympathetic geometry.  Here, I've set Joan Mitchell's After April is set next to a Piet Oudolf composition: 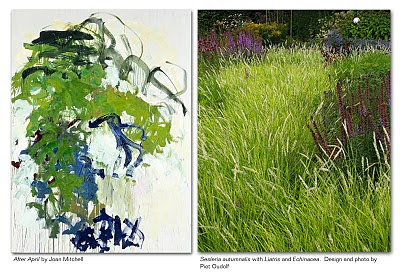 And it is not just the bold use of color that makes this analogy; it is the philosophic stance of the artists that resonates with me.  Painter Barnett Newman described the drive to paint, "What is the explanation of the seemingly insane drive of man to be painter and poet if it is not an act of defiance against man's fall and an assertion that he return to the Garden of Eden? For the artists are the first men." Likewise, if the design of landscapes is not fundamentally a humanistic endeavor, then it fails.  Naturalistic design is not about imitating nature, it is an interpretation of nature that expresses the human condition.  Both the painter and the architect create space for dwelling.  Here Newman's painting declares space in the same way the birch grove does: 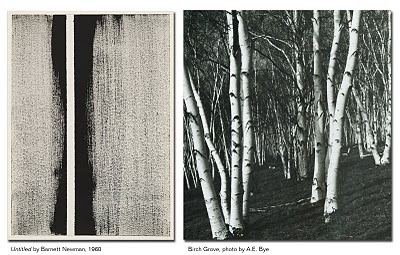 What was liberating about this style of painting was that in communicating a pure emotion, in expressing space, or in holding a void, the painting was liberated from the canvas.  Great planting design likewise liberates a space from the confines of the site or property line. It gives the site a feeling of expansiveness by recalling a larger moment of nature.  Or better yet, it arouses a longing for nature that is embedded in each of us.

Helen Frankenthaler once said, "A really good picture looks as if it's happened at once. It's an immediate image. For my own work, when a picture looks labored and overworked, and you can read in it. And I usually throw these out, though I think very often it takes ten of those over-labored efforts to produce one really beautiful wrist motion that is synchronized with your head and heart, and you have it, and therefore it looks as if it were born in a minute."

So in looking at the paintings I love, it becomes increasingly clear: the only planting worth doing is big, bold, and gestural.  Strive for expansive, moody, luminous design.  And remember that best naturalist design is first humanist. 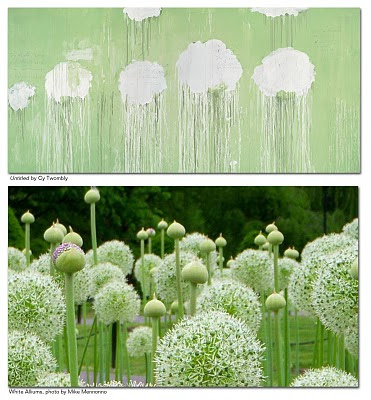